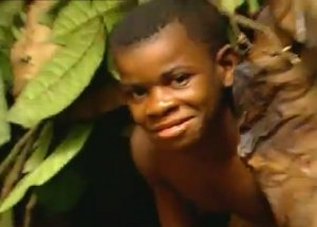 Many consider the term 'pygmy' to be derogatory, however it should not be taken as such rather referring to the estimated quarter of a million indigenous people living in the tropical rainforests of central Africa mainly to be found in Angola, Botswana, Burundi, Cameroon, the Central African Republic, the Democratic Republic of Congo, Equatorial Guinea, Gabon, Namibia, the Republic of Congo, Rwanda, Uganda, and Zambia ~ an area covering twice the size of China! Before the first century BC. it is widely held that the pygmies were the original inhabitants of Africa south of the Sahara. As the Bantu and other ethic group moved south the Pygmies, whilst not supplanted, maintained their forest dwelling hunter gatherer existence ~ a lifestyle little changed to the present day, though increasingly threatened by deforestation, abject poverty and persecution by non forest dwelling peoples. Indeed not only were many slaughtered during the Rwanda genocide ~ an estimated 30% of the entire Pygmy population in that country ~ but, to this day, many pygmies and their children still live as slaves to Bantu masters. Further evidence of persecution can be seen during the Congo civil war when the pygmies, who make up 2% of the Republic of Congo's population, were treated as 'game' and even hunted down and eaten by members of the Movement for the Liberation of Congo, not least because of a belief that Pygmy flesh conferred magical powers when eaten.

There have been many theories put forward to explain the short stature of the pygmy people with many believing it to be genetic or as a result of a lack of vitamin D associated with living deep in the heart of the forest in areas impenetrable to the sun's rays. An adult pygmy male normally stands at just 5ft tall although there are some variations. The Pygmy people tend to live in 'bands' of between 15-70 people and live a nomadic lifestyle within the forest moving to new locations a few times a year in a manner that protects the environment from over exploitation of resources and wildlife. When locating to a new 'home' the group will carry all possessions on their backs and create a new settlement by clearing an area of small trees and undergrowth to construct igloo type domiciles made out of branches interwoven and covered with tree leaves. The forest canopy remains intact to protect them from the sun. 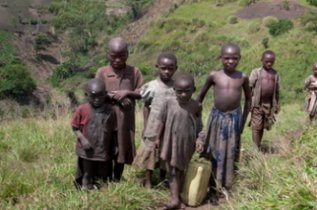 Men are the hunters using traditional bow and arrows and are equally adept at climbing the towering forest trees often to heights of over 90-100 feet to collect honey by burning wooden sticks to drive out the bees from the hive. This is often precarious work perched high in the sky with a burning branch facing probable attack from an angry bee swarm and then returning with the hive to ground level. Women carry their baskets gathering other resources and often have responsibility for the capture and killing of smaller forest mammals.

As noted above, the pygmies have long been discriminated against especially in terms of land. During the colonial period in Africa land was identified and allocated with records and title deeds maintained to support this arrangement. This system continued after colonisation however by its very nature it conflicted with the traditions of the pygmy people who held land under customary law; a law unenforceable under national laws. Additionally Pygmy lands belong to their people rather than individuals making ownership even harder to enforce using modern day law.