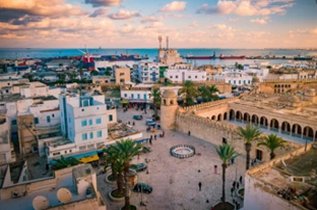 Tunisia, named after its capital Tunis, has a population of some 11.69 million (2019); 98% of whom are Arab. Formerly a semi-autonomous part of the Ottoman Empire, Tunisia became a French Protectorate in 1883, however was briefly occupied to some extent by German and Italian troops until they were forced out in 1943. Tunisia gained independence from France in 1956 and became the Kingdom of Tunisia. Bey Muhammad (the term for king in Tunisia is Bey) VIII al-Amin's rule however was cut short in 1957 when he was placed under house arrest and deposed. He died in 1962 never having abdicated his rights as Bey. The Tunisian Republic was proclaimed and Prime Minister and founder of the pro-independence Neo-Dustour Party, Habib Bourguiba declared president.

Bourguiba went on to dominate Tunisia politics for three decades and established the country as a trading friend of the west. His hard line against Islamic extremists led to many western allies turning something of a blind eye to a harsh regime at home. On 7th November 1987 then Prime Minister Zine El Abidine Ben Ali declared Bourguiba impeached on grounds of senility in what was effectively a bloodless coup, and became president until he was forced to flee the country to Saudi Arabia following violent demonstrations leading up to and including 14th January 2011. Former parliamentary speaker Fouad Mebazaa assumed the role of interim President with a promise of democratic elections within sixty days with Prime Minister Mohammed Ghannouchi being asked to form a temporary government. However within weeks, Ghannouchi was forced to resign bowing to pressure from protestors that Tunisia could only move forward if it made a clean break with the past. Elections for a constituent assembly were scheduled for 24th July however postponed until 23rd October 2011 when 4.4 million Tunisians finally got the opportunity to vote and shape the future of their country, however just 51.1% of those eligible actually voted.

The moderate Ennahda Islamist party won the parliamentary election with 37.04% of the vote but did not win an outright majority yet by far gained most seats in the newly created Constituent Assembly of Tunisia which elected human rights activist Moncef Marzouki as interim president. He, in turn appointed Hamadi Jebali from Ennahda as his prime minister. Marzouki was defeated by Beji Caid Essebsi in the November-December 2014 presidential election, and Essebsi was sworn in as President on 31 December 2014, succeeding Marzouki and remained in office until his death until his death on 25 July 2019. Mohamed Ennaceur then served as the acting 6th President of Tunisia until a fresh election could be held which was won by Kais Saied who became only the second president who was not an heir to the legacy of the country's founding president, Habib Bourguiba.

Today hard line Islamists have carried out attacks in the country pushing for Sharia law whilst the government has proposed a new constitution reducing women's rights referring to them as merely '"complementary to men." The HDI (Human Development Index) is measured by the UNESCO Institute for Statistics (UIS) and the World Bank and is based upon the life expectancy, literacy, access to knowledge and living standards of a country. Tunisia is in 95th place out of 189 countries and territories in 2019 and is above both average Arab and World human development.

Check out all the latest African
volunteer work placements
and opportunities in Tunisia.

Details of how to sponsor
a child in Africa with our
child sponsor programs.

For information, a video and background history about Maghreb where there is some volunteer work.

Read all the latest and breaking
news from Tunisia together with current
events at our Tunisian news portal.