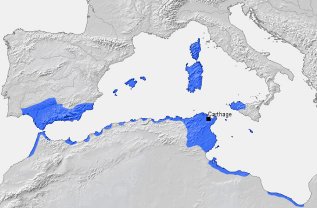 The Maghreb, literally meaning 'the west', is a term used to define the area that constitutes present day Mauritania, Morocco, Algeria, Tunisia and Libya. When, some 10,000 years ago the Sahara region dried up, the Maghreb area was effectively cut off from the sub-Sahara and looked to the Mediterranean for its outside contacts with most inhabited locations running along the Mediterranean and Atlantic coastlines. By 1150 BCE the Phoenicians, a powerful seafaring and trading people initially from the Syrian coast, inhabited the coast of Morocco and over the next few centuries completed their rule over modern day Libya. By then 9th century BCE  the Phoenician city-state of Carthage was in ascendancy establishing control over other Phoenician areas across the African coastline as well as southern Spain and Mediterranean islands (map, left). This hegemony was to last until the Punic Wars which saw Rome triumph at the Battle of Carthage in 146BCE following which they wrested control of all Carthaginian colonies, set fire to its warships and sold tens of thousands into slavery.

By 67CE Rome ruled the entire Maghreb from Egypt to the Atlantic, however its fall in 455CE, saw the Vandals, who had sacked Rome, move into north Africa and seized control of the Maghreb from Libya to Morocco, establishing a Kingdom of the Vandals across Algeria and Libya by 500CE. Justinian the Great, Byzantine Emperor (527 to 565CE), reconquered the territory during the Vandalic War of 533-534CE and the Byzantines ruled the Maghreb until the Arab invasions of the 7th century when it cam under Islamic influence and stewardship.

The Maghreb history continued under Islamic Umayyad, Almoravid and Almohad caliphate control for over 500 years until the 13th century when the Ottoman Empire rose in the east and dominated many provinces including the Magreb area. When the Ottoman empire started to fade, Spain, France and then Italy started to colonise the Maghreb as part of the scramble for Africa. In 1848 France annexed Algeria bringing it under their military control within 40yrs as well as establishing a protectorate in Tunisia whilst following the Berlin Conference, Spain claimed the Western Sahara. The French and Spanish continued to dispute sovereignty across Morocco during this period of history. Italy then ended Ottoman rule in Triopoli in 1911 and by 1914 occupied most of Libya, finally uniting the regions of Tripolitania and Cyrenaica and naming it as the modern day country of Libya in 1934, making it an Italian province in 1939. The end of the second world war saw growing nationalism across the Maghreb and its often brutal suppression by the European colonists, however by the 1950s the realisation of independence for these nations became just a matter of time and they were duly granted that independence during the 1960s.

The Libyan Desert is one of the most
inhospitable places on earth with the
highest temperatures ever recorded.

The Sahara stretches 2,983
miles from the Red Sea to the Atlantic
Ocean. Video and information.

Onformation about the White Desert, a
protectorate in Egypt and home
to some stunning land formations.

The Karoo Desert in South Africa
is one of the most important fossil
deposit sites in the world.

Check out another of the deserts in
Africa, the Namib desert which is the
oldest desert in the world.

Facts, figures and a video about the
Kalahari desert, home to the San
people and Khoikhoi tribes.

The Nubian Desert in north-east
Sudan is the location of the
ancient Pyramids of Meroe.

80% of Algeria's land mass
is made up of the three and a half
million square miles of desert.