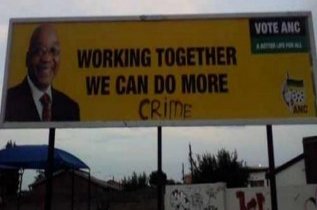 Crime in South Africa is a major problem no better illustrated by the fact that according to South Africa's Medical Research Council over one in four South African males have admitted to carrying out a rape with over half of those admitting to multiple attacks. Disturbingly, 75% state that they first offended whilst they were a teenager. Equally disturbing is that a child is raped in South Africa every three minutes, around 200,000 children every year. This high incidence level is often attributed to the fact that many South African boys see females as 'fair game' with the crime being seen as a form of male bonding when carried out in groups.

The report referred to above indicated that 62% of boys don't equate rape with violence whilst a third believe girls enjoy it. It's bizarre to report that a girl in South Africa has one in three chance of finishing school, but a one in two chance of being raped. And the authorities don't want to know, preferring the crime to go unreported, but when it is, the victim often finds herself ostracised. Of course, it's not just girls, but one in ten males also reports sexual assault by other males. But it's not just sexual crime that casts a shadow over South Africa. Murders (nineteen police officers were murdered in one province alone in 28 weeks), woundings, armed robberies, muggings, car jackings and other thefts are also endemic. Many of these crimes occur in urban areas around hotels and shopping centres but also on trains and other forms of public transport. Private passengers are equally at risk with their cars being smashed and grabbed or the driver being followed home and robbed as they leave their vehicle on their way into their home. South African crime also includes sporadic bombings of ATM machines.

Analysts put these high crime figures to down factors within South African society; the vulnerability of young people due to inadequate child-rearing, followed by poor guardianship and youth socialisation. Poverty and deprivation together with unstable living arrangements and inconsistent parenting also increase the chances of young people becoming involved in criminality activity and violence together with high levels of inequality, poverty, unemployment, social exclusion and marginalisation within the wider population. Alcohol is also a direct cause or contributing factor in many murder, attempted murder, assaults and rape cases with many of these taking place inside or directly outside bars and nightclubs. Even on-duty policemen in the country are regularly arrested for drink driving, a crime which is linked to 27% of fatal road accidents.

The following table shows South African crime statistics for 2019-2020 and overall crime levels were down when compared to the year before although it should be noted that this also cover a period when South Africa was in lockdown due to the Corona Virus pandemic.