South Africa is rich in natural resources making it one of Africa's largest economies, however South Africa has been judged one of the most unequal countries in the world with the Pietermaritzburg Economic Justice & Dignity group, PMBEJD, estimating that approximately 30.4 million of its population of 59.31 million (2020) live below the old upper-bound poverty line of R1,268 and that 13.8 million people live below the food poverty line, equating to 18.9% living without sufficient food to meet their needs. It's a sobering thought that twenty-five years after the end of apartheid, 36.5 % of blacks are unemployed compared with 13.9% of Asians and just 8.81% of whites. Poorly educated and ill people do not make for a vibrant economy, nor does an underinvested in infrastructure with roads and rail networks ill equipped to face the challenges of the twenty-first century. As such, today, for every $100 of income for whites, a black person would have an equivalent income of just $13.00. In fact, much of this poverty can be traced back to the apartheid era in South Africa's history when there was little investment in black housing, education nor basic facilities such as healthcare etc. During the era of apartheid there was one doctor for every 400 white children, but just one doctor for every 44,000 black children. There are also strong variations in the poverty figures throughout the country. In rural areas nearly 60% live in poverty with the provinces of KwaZulu-Natal, the Eastern Cape and Limpopo being the poorest and home to 47.4% of South Africa's population. In Limpopo 64.6% of the population live in poverty whilst in Gauteng it's 'just' 24.9%. 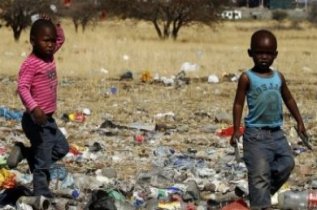 Similar inequalities can be seen in the education system when there was one teacher for every 22 white children whereas black children had class sizes averaging 60 students with $696 spent on every white child's education but just $45 per annum for each black child. When apartheid ended, South Africa sought to re-enter to world community by opening its doors to foreign investment and trade however, in doing so, it opened those same doors to foreign labour who took the few jobs available away from native South Africans. This ended with rioting in some areas of the country. It has also been claimed that after 1994 the government was keen to focus on the economy and the empowerment of its black citizens rather than on the basics of health and education yet today as many as two thirds of childhood deaths could be prevented by simple improvements in health care provision. Another factor that has contributed to poverty in South Africa is the prevalence of AIDS with South Africa having the highest number of AIDS infected people than anywhere else on the planet. When the employed or self employed become ill, their source of income is lost with little or nothing remaining to pay for expensive medical and funeral bills. Children in these families are often forced to drop out of school to care for their ill parents or look after younger siblings taking away their one route out of poverty. There are an estimated 1.7 million children in South Africa who have been orphaned through AIDS. 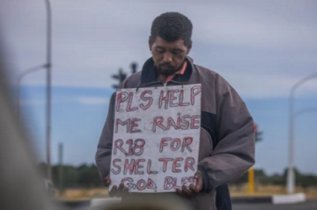 Poverty in South Africa affects all aspects of life. Infant mortality rates are running at 27.5 for every 1000 births (compared to 3.4% in the EU for the same period,) crime is endemic and life expectancy is just 63.86 years. Although interestingly enough South Africa can now boast one of the most clean water systems in the world, due to the lack of sanitation and access in the country's rural communities, the threat of water borne disease is steadily increasing. In fact, in these rural areas, 1.4 million children live in homes that had no safe water supply being forced to rely on unsafe streams for drinking water and 1.5 million children have no access to proper sanitation. Additionally, 1.7 million children in South Africa live in shacks with no proper bedding, cooking or washing facilities. Former Archbishop Desmond Tutu envisaged a 'Rainbow Nation' after apartheid, with all races working together for prosperity for all. However, according to UNICEF in 2020, the child poverty rate for black children remains at 68%, 38% for 'coloured' children and just 11% for white children.