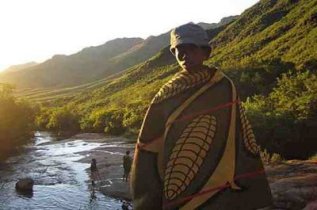 Life is tough for the 800,000 children under the age of fifteen living in Lesotho with poverty across the country with Maseru and Berea having the lowest proportion of multidimensionally poor children (at 56% and 59%, respectively) while Mokhotlong and Thaba-Tseka have the highest poverty rates among children at 85% and 84%. Overall, there are more poor children in the higher mountain locations of Lesotho (82%) compared with the lowlands (53%). Around 33% of children under the age of 5 years are stunted, with a low height for their age with 77% of children aged 0-23 months having an insufficient nutritional intake. Over 200,000 children in Lesotho are orphans (of which 130,000 of them have lost one or both parents to AIDS) and life expectancy, in a country with a population of 2.142 million (2020), is just 54.33 years (2019).

These child have very poor life opportunities and the future looks equally bleak with the country locked in a downward poverty spiral with a dwindling and sick population seemingly unable to reverse this trend. Children in Lesotho, outside of urban areas, normally live in small, one roomed shacks (below) with thatched or tin roofs and only 44% of households have access to electricity (2019) and much less so in the more rual areas. Where they have both parents, their mothers will till the land and fathers will attend to livestock with about 70% of the population living in rural areas and reliant on subsistence farming given water and diamonds are Lesotho's only significant natural resources. Many adult men travel to South Africa to work in the mines however have little or no control over these employment opportunities especially when there is an economic downturn leaving Lesotho in 165th place out of 189 countries and territories in 2019 when ranked in terms of life expectancy, literacy, access to knowledge and the living standards of a country. 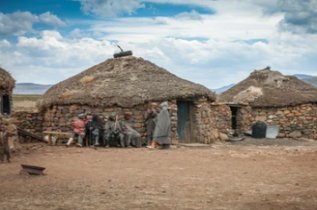 Most children have to walk two hours to school and the same back, often arriving at school unable to concentrate due to malnourishment. Despite this there are high rates of literacy, and, unlike many other African countries, female literacy is considerably higher than male literacy standing at 95.6% and 83.3% respectively. On their return from school, many are required to look after sick parents in addition to other chores such as collecting sticks for firewood and replenishing water supplies. Water access itself is becoming a real threat to children living in Lesotho. The World Food Program estimates that about 30% of all water reservoirs in Lesotho have now dried up in a country where only 10% of its land is cultivable.

The ongoing drought conditions have led the United Nations to report that climate change could shrink this even further to just 3% within twenty five years meaning an already poor population will have to further rely on expensive imports when it already is forced to import 65% percent of its annual maize needs and 80% of its annual wheat needs just to ensure the population is fed. Currently Lesotho benefits from international aid to plug this financial gap with most of this aid coming from the United States, the World Bank, the United Kingdom, the European Union, and Germany. Many of the older children head up households and drop out of school to provide for their younger siblings with UNICEF reporting that education is a vulnerability for 17% of primary school children but 62% of secondary school children. Inevitably, children caring for children impacts on their psychological development and wellbeing, not least because such children are unlikely to address the health issues of the younger children in a country where access to to health facilities is already scant with five doctors per 100,000 residents and an infant child mortality rate (under fives) of over 8% (86.4 deaths per 1,000 live births in 2019). 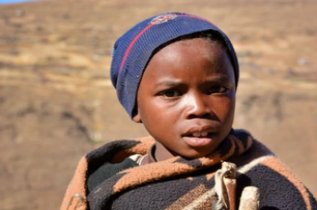 And as these Lesotho children grow up, they face a real risk of their country facing extinction as Lesotho has the second highest HIV prevalence in the world greatly reducing living standards and exacerbating poverty, inequality, and unemployment levels throughout the country. The government enacted a 2018/19–2022/23 National Strategic Plan for HIV however, in a country where 25.6% of adults aged 15–59 years are HIV-positive and 30% of boys report that they have had sex before the age of 15yrs compared with 6% in developed countries, progress is slow not helped by the fact that this younger age group is unikely to be aware of their HIV status compared with older adults. Many Lesotho children are also being abandoned on the streets. Save the Children in Lesotho reported that relatives are either incapable of looking after them or do not want to be "overburdened by someone's HIV-positive child who is going to die anyway". Many of these children end up living on the streets placing themselves at risk of abuse and sexual exploitation.

The video (below) provides some insight into the lives of children and families living in Lesotho. Also below is a directory of some projects and programs working in Lesotho with these children who are looking for your support.