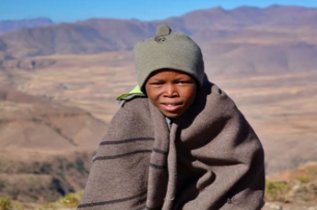 There are over 200,000 orphaned children live in Lesotho (of which 130,000 of them have lost one or both parents to AIDS) and live expectancy is just 54.33 years (2019) not helped by the fact that, despite its small population, Lesotho has the second highest HIV prevalence in the world with 25% of the population, one in four people in the country, living with HIV. Just as disturbing, it is estimated that 12,000 children have the virus (not least because 30% of boys report that they have had sex before the age of 15yrs compared with 6% in developed countries) with many of them abandoned on the streets by non-parental carers who hold a simple view that these children are going to die anyway so why take on the financial burden of supporting them through childhood.

Children in Lesotho have very poor life opportunities. Most have to walk two hours to school and the same back, often arriving at school unable to concentrate due to malnourishment. On their return from school many are required to look after sick parents in addition to other chores such as collecting sticks for firewood and replenishing water supplies. As these children grow up, doctors, teachers and other workers are dying around them in great number from AIDS with no similarly 'skilled' workforce to replace them. Child sponsor programs in Lesotho work with orphan and abandoned children, work to improve access to water, education and healthcare alongside HIV awareness and prevention programs. You can help when your sponsor a child in Lesotho.