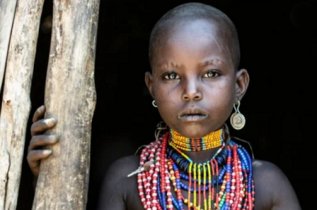 Ethiopia is perhaps best remembered for the images from the drought of 1994-1995 that affected around eight million people, with one million of them dying of starvation. Never a colony, it was ruled for over forty years by the Emperor Hailie Selassis and then a military junta until 1991. Wars with neighbours continued over boundary disputes and these are currently on hold although relations with neighbouring Eritrea remain particularly fractious and unstable. Ethiopia is in 173rd place out of 189 countries and territories in 2019 when ranked in terms of life expectancy, literacy, access to knowledge and the living standards of a country.

In Ethiopia one out of every twenty children dies before reaching their fifth birthday (down from a horrifying one in four in 1970). Approximately 2.6 million children of primary school age are not in school, of which 43 percent are boys and 57 percent girls and only 25% of secondary school aged children are enrolled in secondary school with many of those who are living in urban areas. Although there have been strides to reduce poverty in Ethiopia, declining from 38% in 2008/2009 to 24% today, there are still large swathes of the country where the upturn in the economy has not yet reached with rates of child poverty ranging from 18% in Addis Ababa to 91% in areas such as Afar and Amhara.

Access to health care is also an issue in Ethiopia especially in non-urban areas with the World Health Organization (WHO) estimating that the country has only 3 medical doctors per 100,000 citizens. Part of this is because many of those in Ethiopia who do get educated move abroad to earn their money. For example, there are more Ethiopian trained doctors living in Chicago than in the whole of their home country. Child sponsor programs in Ethiopia focus on improving water access and food security, strengthening health services and providing support to children to stay at school as well as caring for orphaned and abandoned children. You can make a difference when you sponsor a child in Ethiopia.