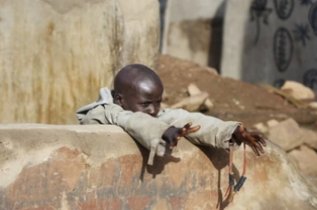 Even by African standards, Burkina Faso is a poor country and is in 182nd place out of 189 countries and territories in 2019 when ranked in terms of life expectancy, literacy, access to knowledge and the living standards of a country. The poverty in the country is primarily attributed to a paucity of natural resources and an economy that is predominantly agricultural and focused on cotton production and growing food crops such as peanuts, shea nuts, sesame, sorghum, millet, corn and rice as well as rearing livestock. Over half of Burkina Faso's population of 20.9 million (2020), who predominantly belong to the Mossi, Fulani, Lobi or Bobo groups, are under the age of 17, however very few if any, will live to see old age with a life expectancy of 61.58 years (2019).

It is estimated that there are 770,000 children in Burkina Faso are growing up without parental care with 140,000 orphans and children made vulnerable by HIV. In one year alone 18% of the country's entire population were orphans or abandoned children. Unlike many other countries in Africa, there are few child sponsor programs in Burkina Faso, however there remain real issues with children living in abject poverty, lack of food and safe water with most dependent on foreign aid to survive. Save the Children have stated that more than 1.5 million children under five in Burkina Faso, (that's over over one-third of all children in that age bracket), are facing a nutrition crisis.

The child sponsor programs in Burkina Faso that do exist focus on ensuring access to clean water, medical care and education in a country where, in 2018, adult literacy rates were just 41.2%. Primary school enrollment is compulsory for children in Burkina Faso between the ages of seven and fourteen however in reality about 36% of children do not attend engaging in child labour to support their families instead and 67% of girls over the age of fifteen not able to read or write. With child poverty at 47% and a quarter of all children underweight, other child sponsor programs include working across the board to ensure children simply have enough food to survive in an area where many Burkinab children are experiencing hunger as a result of displacement from the conflicts in Africa's Sahel region. You can help when you sponsor a child in Burkina Faso.