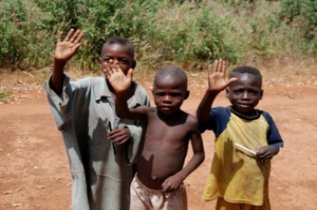 Nearly half of Burkina Faso's population of 20.9 million (2020) are under the age of 15 (44.4% in 2020), however very few will live to old age with a life expectancy of just 61.58 years (2019) and a high infant mortality rate of 87.5 deaths per 1,000 live births, largely attributed to a patchy and weak health system. Most children in Burkina Faso live in poverty although absolute figures are not available, however average income per capita in the rural areas is estimated to be near the poverty level, meaning around 60% of the population is. Others suggest the figure of Burkinabe living below the poverty line is closer to 40%. The higher figure is probably more realistic given that Burkina Faso is in 182nd place out of 189 countries and territories in 2019 when ranked in terms of life expectancy, literacy, access to knowledge and the living standards of a country.

Burkina Faso children are brought up to be respectful, polite, obedient, courageous and hard workers after all, 'Burkina Faso', means "land of honest men". There is a strong emphasis on responsibility, family values and dignity in a country which is 60.5% Muslim, 19% Catholic, 4.2% Protestant and 15.3% Animist (a belief that souls exist not just in humans but also in animals and plants as well as inanimate objects such as rocks and mountains as well as rivers). There are a number of ethnic groups in Burkina Faso the largest being the Mossi (52.5%), followed by the Fulani (6.8%), Gurma (6.8%), Bobo (4.8%), Gurunsi (4.5%) Senufo (4.4%) and the Bissa (3.9%) with others making up the remaining 14.7% of the population. 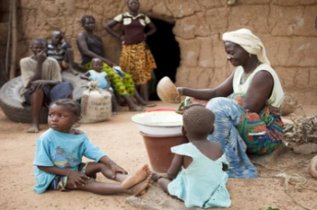 There are too many ethnic groups to explore what they all mean for children in Burkina Faso but, for example, a Mossi baby is formally presented to the community three days after birth for a boy, and four days after birth for a girl and before children become adults they are circumcised with boys going in groups into the bush for 90-100 days to recover and learn from the elders all they need to know about being a valued member of the community. Neither boys nor girls are considered to be full adults until marriage. Mossi families live in traditional adobe huts with cone-shaped, thatched roofs (although aluminium is beoming commonplace) and they live in 'villages' of immediate and extended family members with their boundary being a natural feature like a stream. The 'adobe' is surrounded by a wall within which each wife, if more than one, has her own hut where she lives with her children (Mossi children below) with the boys tending to the family sheep and goats whilst, as ever, the girls assist with domestic chores and childcare. 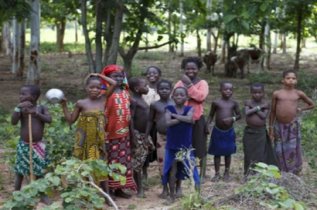 Education for children in Burkina Faso is compulsory between the ages of seven and fourteen and by law, free, but in reality the government doesn't have the resources to provide universal free primary education so children's families are required to pay for school supplies with communities often made responsible for actually building the schools then paying for the teachers' housing. Even though compulsory, there is little or no enforement regime and enrollment rates are poor, particularly for girls who are often kept at home to help run the household and perform chores. Overall successful primary school completion for children in Burkina Faso is 31% reflected in a youth literacy rate of just 58%. Despite this, when it is affordable and available, education is held in high regard as an escape route from poverty and educated children in Burkina Faso are held in high regard. In recent years there has been increased gender equality in schools between boys and girls although lower secondary school attendance remains at just 18% whilst upper secondary school attendance is a paltry 8%.

As in many countries, Burkina Faso has its fair share of street children. The country has over 770,000 children growing up without parental care with thousands orphaned by AIDS, some estimate as high as 100,000. Many of these children, some as young as seven, drift into urban areas, others arrive after their parents migrate to find work or they are simply pushed out by their families because of poverty. In one year alone it was estimated that 10,000 children were living on the streets in Burkina Faso, a sharp increase (approximately 43% in five years) and that is just a count of the visible children. These children are vulnerable to exploitation with traffickers often recruiting Burkinabe children on the pretext of educational opportunities and instead forcing them to work on the land, in mines or as street vendors and domestic servants. Children from the poorest families often have parents who know of their circumstances but are just grateful for the additional money it brings in to support the family. The video below shows aspects of daily life in Burkina Faso. There are many charities you can contact to help children there together with child sponsor programs.