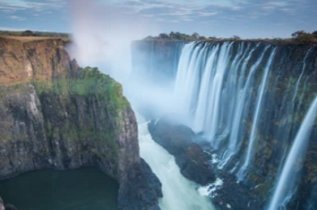 The Republic of Zambia, with its population of 17.86 million (2019), is situated in southern Africa bordered by the Democratic Republic of Congo to its north, Tanzania to its north-east, Malawi to its east, and Mozambique, Zimbabwe, Botswana and Namibia to its south with Angola to its west. The Zambia (named after the Zambezi river that flows through the country) was one of Africa's richest countries up until its independence from the United Kingdom in 1964 not least because of its rich copper mining and export heritage. However following independence, Zambia followed the route of so many emerging African nations with one party installing itself in power and opposition parties suppressed. Zambia's first president, Kenneth David Kaunda pursued this route and his socialist policies severely damaged the country',;s economy and infrastructure which was already under resourced at the time of independence. By 1991 civil unrest forced multi party elections with Frederick Chiluba becoming president. Today Zambia is a relatively stable multi-party democracy having experienced a number of successful and peaceful transitions of power although serious challenges face the country.

Such challenges include widespread poverty, a low (though increasing) life expectancy of 63.51 years (2018) not least because of the high prevalence of AIDS and the high numbers of orphans in the country ~ 30% of all children in Zambia under the age of 15 are orphans. Many of them head towards urban areas simply to survive by begging, forced labour and/or sexual exploitation. One fifteen year old boy described the lifestyle: "I have lived like this since 2001 when my parents died. I sleep in ditches. If I see people carrying plastic bags, I ask to help. They give anything, maybe 1,000 kwacha [UK 18p], maybe more." There is so much work needed to be undertaken with children in Zambia to get them off the streets into safe environments, into school so that they can get an education and to develop a better awareness of HIV/AIDS. For more information about Zambia check our profile pages below.

Zambia is in 146th place out of 189 countries and territories in 2019 when ranked in terms of life expectancy, literacy, access to knowledge and the living standards of a country. That is above neighbouring Zimbabwe in 150th place, Angola in 148th place and well above its other neighbours Malawi (174th) and Mozambique in 181th out of 189th. Find out more about Zambia in a series of articles and videos below together with news about Zambia.

A video documentary and timeline
about the history of Zambia from early
times to the present day.

A video documentary together with
facts, figures and pictures about
daily life in Zambia today.

Pictures, facts and figures about
poverty in Zambia, particularly
in rural areas of the country.

A video documentary and article about
the growing problem of street children in
Zambia at our sister site.

Pictures and images about Zambia captured on video showing the
finest of the country.

A short video and information about Lake
Tanganyika, the world's longest
lake and second deepest.

All about Lusaka, one of Africa's
fastest growing cities, together
with images and video.

Pictures and images from the sky
as you make a virtual landing at
Zambia's international airport.

Take our online Zambian trivia
quiz and see how much you know
about Zambia.

Details of how to sponsor
a child in Zambia with
Zambian child sponsor programs.

Check out all the latest African
volunteer work placements
and opportunities in Zambia.

Read all the latest and breaking
news from Zambia here at our
Zambian news portal.