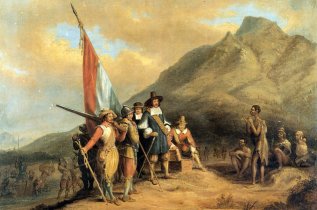 The history of South Africa can be traced back more than 100,000 years from archaeological records, however the first known group of people to inhabit the area were the Khoikhoi, comprising the San hunter-gatherers and the Khoekhoe who populated the southern and western coastal strips of South Africa for grazing. Around 500 BCE, Bantu speaking people started migrating south into northern South Africa settling into villages, introducing new crops and methods of farming. By the 12th century there can be found evidence of trading around South Africa with Chinese artefacts identified at the ruins of Mapungubwe. The history of South Africa becomes more detailed from the 1480s when Bartholomeu Dias, a Portuguese explorer, sailed around the Cape of South Africa, and even more so from 1497 when Vasco da Gama landed on the Natal Coast to the east of South Africa. The area proved to be of little interest to the Portuguese with ships floundering on the rocky coastline and attempts at trade with the Khoikhoi proving hostile. 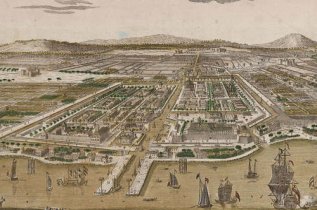 Nevertheless the Dutch and English started making forays into the area finding it a useful stopping off point and in 1647 a group of Dutch sailors lived in South Africa for a year after their ship was destroyed. This experience led the Dutch to consider building a permanent base at the Cape of Good Hope (above) under the auspices of the Dutch East India Company led by Jan van Riebeeck, not in any way to attempt to colonise the area, but simply to provide a manned shelter for their trading ships as they journeyed to and from the east as well as a source of fresh food, particularly vegetables, that were available from the fort. Although this fort was not intended to be a colony, within ten years, 250 white settlers lived there and they had started to encroach on lands previously held by the Khoikhoi, leading to friction. These settlers were mainly Dutch employees of the Dutch East India Company but also included Germans, Britains and Flemist Calvinists. Within fifty years, white farmers known as trekboers were exploring further afield pushing the Khoikhoi from the land with many turning to servitude to the 'colonists' to support themselves. Many of these Dutch, German and French Huguenot settlers began to lose their sense of European identity thinking of themselves as Afrikaner and intermarrying with the Khikhoi. 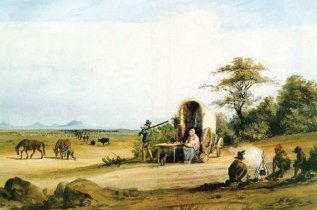 By the end of the 18th century, Dutch trading power was beginning to wane and the British, concerned that the Cape would fall into French Napoleonic hands, seized the area from the Dutch in 1795, however it was returned to the Dutch eight years later before being captured and ceded to Britain in 1806 because of the newly formed alliance between the Dutch and Napoleon and this act was confirmed by the Treaty of Vienna in 1815. As the British presence in the area increased with over 5000 settlers by 1820, the incomers pressed east where they encountered the Xhosa and ongoing warfare soon become commonplace. As this timeline was unfolding so another one was developing, the founding of a Zulu empire by Shaka Zulu with its considerable fighting force of warriors. Following the emancipation of slaves in 1834 and the British declaration that all races were to be seen as equal, together with the required payment of compensation to former slave owners, the Boers as they were by then known, set off on what was termed the 'Great Trek' a breakaway from British colonial rule in favour of finding land that could be used to establish an independent state; a state where blacks would not be seen as equals. What they hadn't realised was that the lands found had been temporarily vacated by the Zulu. The ensuing wars ended with the defeat of the Zulus at the Battle of Blood River and the Boers began to settle in Natal declaring it the Boer Republic, however the British, concerned that the feuding could spill over into Cape Province, annexed Natal in 1843 bringing it under direct British rule as a crown colony. Squeezed by the British and native south Africans the Boers moved further north (below) leading to the founding of the Orange Free State and the Transvaal, which was later to become the South African Republic. 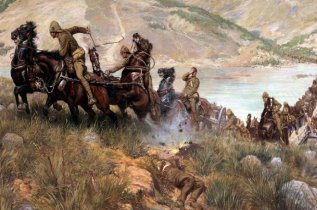 The 1850s saw Britain acknowledging the existence of the Transvaal however the Boers soon after declared it a republic. Britain has little economic interest in the Boer areas, so allowed these events to proceed unchallenged however in 1867 something happened that was to steer the course of much of the latter part of the nineteenth century, diamonds were discovered at Kimberley suddenly making the Boer republics of sudden economic interest. This interest manifested itself in the British wanting to amalgamate the Boer republics with their own territory at Cape Province which had been granted self-governance in 1872. As such, British Cape Province unilaterally annexed the Transvaal in 1877. The Boers retaliated in force in 1880 with the outbreak of the first Anglo-Boer War in which they soon inflicted a heavy defeat of the British on 27th February 1881 at the Battle of Majuba Hill after which independence was declared as the Zuid-Afrikaansche Republiek (South African Republic.) Undeterred, the British, having by now seen off the Zulus in Natal, forged ahead with flooding the area with cheap labour triggering the Second Anglo-Boer war in 1899 which saw the Boers defeated and the South African Republic and Orange Free State made self-governing colonies of the British Empire. The South Africa Act of 1909 saw a union of the colonies as the Union of South Africa; a British Dominion territory but with home rule and similar status as Australia, New Zealand and Canada but only whites could be elected to parliament. The anti-black stance was compounded by the Land Act of 1913 which prevented blacks from buying land outside Cape Province. The following year the third Boer war, sometimes called the Maritz Rebellion, broke out with former Boers refusing to take sides with the British against the Germans in World War I, not least because they were still nursing heavy casualties from the Second Boer War. The rebellion was quickly suppressed with its ringleaders being fined and imprisoned. On release from prison those who had risen up in formed the National Party, a party that was to go on to dominate the history of South Africa until the freedom of Nelson Mandela in 1990. The subsequent history of Africa is taken up here.