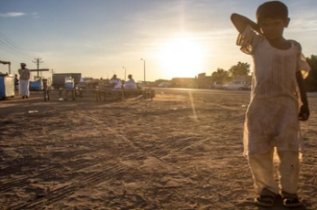 Sudan is in 170th place out of 189 countries and territories in 2019 when ranked in terms of life expectancy, literacy, access to knowledge and the living standards of a country with a life expectancy of 65.31 years (2019). 46.5% of the population live below the poverty line and 80% of the population seeks out a living on the land although just 6.7% of it is arable. Nearly one in ten children in Sudan is an orphan, most live in poverty, droughts have led to harvest failures so food is scarce, around four million of the population have been displaced by internal war and an estimated million killed in those conflicts. There is only one trained doctor for every 100,000 people, more than half of all children in Sudan don't attend school (falling to just 20% in some areas) so will struggle to find employment in a country where unemployment rates are high and there is a refugess crisis. The situation in Darfur and South Sudan is chroncled elsewhere. Child sponsor programs in Sudan work with orphaned and abandoned children, providing food supplies to severely malnourished children, developing water supplies, education projects and providing seeds and tools as well as aiding those in refugee camps. You can help when you sponsor a child in Sudan.