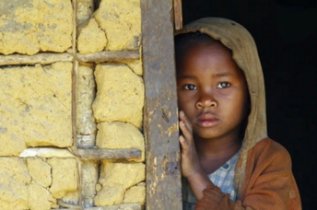 Madagascar is the world's fourth largest island and following independence in 1960 it replaced one form of unwanted rule with a succession of unstable governments, coups and assassination attempts at odds with a military aim of creating a 'socialist paradise' with firm ties to the Soviet Union and the spurning of ties with the west. The last such coup was in 2009 and in there has been political instability since that time leaving a government barely able to meet the many challenges the country faces not least the famine that hit the southern areas of the island in 2021. As such, istead of being an island paradise in the Indian Ocean, Madagascar is in 164th place out of 189 countries and territories in 2019 when ranked in terms of life expectancy, literacy, access to knowledge and the living standards of a country.

Then on 21st May 2021, Amnesty International issued an alert regarding the situation in the country warning "more than a million people [are] facing hunger due to the devastating famine currently ravaging southern Madagascar." Today children are being pulled out of schools, factories are closing, hospitals are struggling and running out of supplies against a backdrop of over half the country's children already suffering from malnourishment. Half of all children under the age of five will die of diarrhoea, those who do survive will suffer from frequent bouts of illness even at school, where only 18% of Madagascar's schools have access to drinking water and only 30% have toilets. Nearly 70% of Madagascar's population lives below the poverty with poverty rising to 85% in rural areas, which is home to 80% of the country's 20 million population.

Of the 9,571,000 children in Madagascar, there are 910,000 orphans, just under 10%,and 11,000 of these have been orphaned by AIDS (although some sources put this higher at 30,000) with five children being born every day in Madagascar with the virus. Overall 43% of the country's population is under the age of 15yrs old (compared with 17% for the UK) and many grow up without adult care having to fend for themselves or being brought up in child-headed families. Child sponsor programs in Madagascar focus on providing care to orphaned and abandoned children, access to water, health and education projects, food aid and working with HIV awareness and prevention. You can make a difference when you sponsor a child from Madagascar.