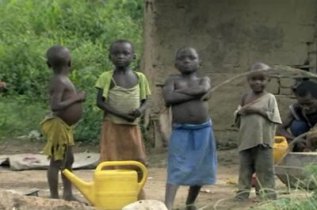 Since independence from Belgium in 1960 the Democratic Republic of Congo has effectively been a battleground with ongoing wars and insurgencies that have killed upwards of 5.4 million people, the most causalities of any war in earth's history, save for the Second World War. Today the country continues to suffer from inter-ethnic clashes, military operations of armed groups, the illegal exploitation of resources and natural disasters such as earthquakes, floods and fires. This ongoing situation has left the Democratic Republic of Congo in 175th place out of 189 countries and territories in 2019 as ranked by the HDI (Human Development Index) measured by the UNESCO Institute for Statistics (UIS) and the World Bank which is based upon the life expectancy, literacy, access to knowledge and living standards of a country.

15% of the Democratic Republic of Congo's child population are orphans, 770,000 of them orphaned through AIDS alone. However, most have become orphans a result of the ongoing conflicts. We're talking about 5,000,000 orphaned children here ~ about the entire population of Scotland. Life expectancy for a child in the Democratic Republic of Congo is 60.68 years (2019) with a child mortality rate (under fives) of 84.8 deaths per 1,000 births. The country's education system, despite attempts to improve it over the last two decades, suffers from both poor coverage and poor quality. 3.5 million children of primary school age are not in school and national data indicates that only 67% of children who enter first grade will complete their final primary grade.

The United Nations' Food and Agriculture Organization (FAO) and the World Food Programme (WFP) in 2021 estimate that 27.3 million people (out of DRC's overall population of 89.56 million in 2020) need food aid and, of those, 7 million people face severe malnutrition. Child sponsor programs in the Democratic Republic of Congo range from providing practical help for displaced children in the east of the country with blankets and shelter to working with orphans and abandoned children, improving access to health and education as well as helping to develop the country's infrastructure. You can help when you sponsor a child in the Democratic Republic of Congo.