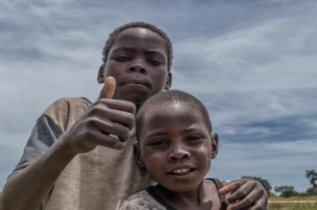 Unlike many other countries in Africa, there are few child sponsor programs in Angola, however there remain real issues with the government estimating that approximately two million children are not attending school and this situation is particularly bad in rural areas with schools few and far between. Poor attendance is compounded by the emotionally state of children with around half of them in the worst war torn areas of Angola having been shot at, lost their homes, or seen neighbours and members of their families killed. Life expectancy for each child in Angola is 61.15 years (2019) but one in five won't reach their fifth birthday not least because over half of all children in Angola live below the poverty line (41% overall but nearly doubling in rural areas). Just 51% of the child population has access to safe water supplies and 16% of all children are underweight. All this despite Angola being one of Africa's most resource-rich countries; the second-largest oil producer on the continent and the fourth-largest producer of diamonds with an abundance of other minerals as well as lumber and fish.

Whilst literacy rates are generally high amongst males (82%) they drop alarming for girls (60.7%) reflecting the number of girls who drop out of education at an early age. This gender discrepancy reflects a cultural norm in Angola that "boys study, girls cook", although in education at least this mentality is slowly developing towards gender equality. Spending on education in Angola is 3.4% of GDP compared with 5.3% in the UK, 5.7% in the US and 5.3% in South Africa but again, more rural areas see little of that spending. The country is also affected by periodic droughts which affects crop production and food security. The number of malnourished children is currently increasing with more than 2.4 million people and severe malnutrition in Angola has affected 85,000 children since 2019 leading to many admissions of severely malnourished children in Angola's therapeutic feeding centres, particularly in Huambo, Bie and Kwanza Sul. Child sponsor programs in Angola focus on the building of community schools and heath centres focussing on vaccination prevention programs such as malaria, a major cause of child mortality, and also developing HIV/nutrition awareness. Other programs include working with child AIDs orphans and family strengthening programmes. You can help when you sponsor a child in Angola.