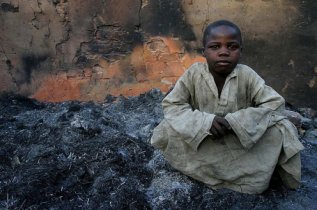 In a country with 350,000 orphans, chronic poverty, civil strife and high HIV/AIDS infection rates, it should come as little surprise that there are around 40,000 thousand street children in the Central African Republic, many of whom live in the capital city of Bangui where they are at increased risk of child trafficking and abduction for forced labour, domestic servitude and sexual exploitation. Many of these children can be seen begging on the streets to provide for themselves and often young siblings, not always because they live on the streets but have been sent there, sometimes as young as seven, to sell food, water, and even face masks, to passers-by to support their struggling familes and the risk of getting caught is better than the alternative with one eleven-year-old child noting, "My mother beats me" if he doesn't sell enough boiled eggs each day. Many of these children earn just 13p a day.

In fact the Central African Republic has long had one of the world's highest child labour rates according to a 2021 report by Save the Children, who estimate about 27% of children aged 5 to 17 are engaged in child labour despite it being illegal to employ a child under the age of 16 without a Labour Ministry exemption, and is punishable by up to five years in prison under a recent child protection code. Some of these street children are sold abroad to Cameroon, Nigeria, and the Democratic Republic of Congo Children where they work in gold and diamond mines, transporting and washing gravel, digging holes, and carrying heavy loads with the Central African Republic being a recognised source and destination country for trafficked children. 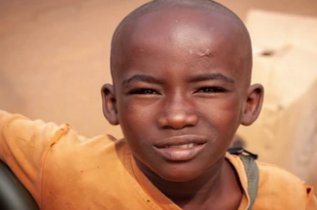 While some children work the streets as they are out of school and bored or because their parents force them to, most are not there out of choice. They have no adults carers, have become dislocated from families fleeing violence or flee violence themselves at home, often rooted in abject poverty where not only does the future seem bleak but unobtainable. Some are children who have been released or escaped from armed groups who they were easily recruited into being traumatized, uneducated, and rootless, and have no-where else to go. One thing they do have in common is that these street children are just turned away at educational or health resources and are stigmatised by a society that simply doesn't and can't care for them. As one former street kid reported, "I saw many of my friends die of AIDS - they did not know where to go for treatment because they were street children, many of them were HIV-positive or had sexually transmitted diseases (STDs), like gonorrhoea or syphilis." The 25 year old who who had started living on the streets when he was 14 years old after his parents died also noted, "The street children are involved in many sexual relationships and there is a great deal of sexual violence, mainly against girls, but also against boys."

Another explained how he became one of the street children living rough in Bangui. "When my mother and father went to work in Angola they decided to take three daughters with them but not me. During the night when we want to sleep we look for pieces of cardboard. Before we sleep we pray and sing for God and after that we can sleep in a group, not alone. When it's raining it's not possible to sleep on this walkside so we cross the road and go under the terrace on the other side of the street. When the rain is too strong it enters under the terrace so we have to stay standing up until morning." Another of the street children in the Central African Republic explained, "My mother died and my father left the kids. So I was in my grandmother's home and I decided to go in the streets to find something to eat and give it to my brothers and sisters." The video (below) gives ssome insight to life for street children in the Central African republic together with details of projects and programs working there to support them.