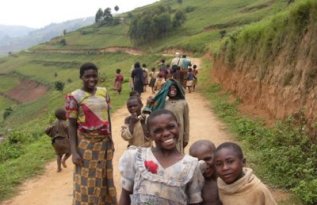 Uganda has rightly been called the 'Pearl of Africa' for its unspoilt natural beauty and the warmth of its people. However in many ways its a stalled country with most of its population living below the poverty line in mud built homes without access to basic services such as water, electricity and sanitation. Recent oil discoveries may pump much needed investment into Uganda's infrastructure, however, in many other African nations, the onset of oil revenue has generated new social and political instability. Before independence from the UK in 1962, Uganda was not a country, rather a loose grouping of ethnic tribes and kingdoms with an equally large number of systems of governance. The largest such grouping is in Buganda, a sub kingdom within Uganda which has its own monarch, the Kabaka. Buganda occupies the central region of Uganda including its capital, Kampala.

Following independence Milton Obote became executive Prime Minister with the Kabaka of Buganda, Mutesa, becoming ceremonial president. Within a few years Obote became implicated together with the deputy commander of the armed forces, one Idi Amin, in a plot to smuggle gold, coffee and ivory out of the Democratic Republic of Congo. Refusing to bow to any investigation, Obote acted swiftly to secure his power. He suspended the constitution, declared himself president and ordered a state of emergency with many former cabinet members being arrested and detained. Obote then had his newly appointed Chief of Staff, Idi Amin, storm the president's palace sending Kabaka Mutesa into exile and he passed a new constitution ending Buganda's autonomy and the creation of an all powerful president, himself. There followed decades of harsh rule with life in Uganda becoming even more severe after Obete was ousted by Idi Amin however a further coup in 1986 installed the leader of the National Resistance Army, Yoweri Museveni, as president and since that time Uganda has made significant social and economic progress.

However, after decades of conflict the country, with scarce natural resources in the first place, continues to be one of the poorest countries in the world with sub standard health care, high rates of malnutrition and diseases such as malaria rampant, assisted by less than half of those living in Uganda having access to safe drinking water. Today Uganda is in 159th place out of 186 countries and territories in 2020 when ranked in terms of life expectancy, literacy, access to knowledge and the living standards of a country with a life expectancy of 54 yrs. For more about Uganda check out our profile pages below.

Check out all the latest African
volunteer work placements
and opportunities in Uganda.

A video documentary and timeline
about the history of Uganda from
independence to the present day.

A video documentary together with
facts, figures and pictures profiling
daily life in Uganda today.

A profile of Uganda in pictures and
images captured on video showing the
finest of the country.

A video documentary and a facts
and figures profile of the water
situation in Uganda.

Many Ugandan children are trafficked
internally and abroad with Uganda a
Tier 2 country for child trafficking.

A facts and figures profile about the
education system in Uganda including
primary and secondary education.

The Lord's Resistance Army has
caused terror across East Africa and
northern Uganda for decades.

A video documentary providing a profile
of Kampala, the capital city of Uganda
since independence.

An "on the ground" project in Kampala
running a number of projects for street
children in Uganda.

Take our online trivia quiz about
Uganda and see how much you
know about Uganda.

Read all the latest and breaking
news from Uganda here at our
Uganda profile portal.