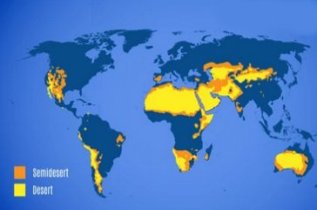 Although there are many deserts in Africa, here we showcase profiles of the main deserts. Others such as the Blue Desert, whilst technically in Egypt, are actually on the Arabian peninsula. The biggest deserts in Africa, including the Libyan Desert and the Algerian desert, are part of the Sahara Desert, the world's second largest desert after Antarctica (deserts are defined as areas with negligible rainfall.) The Sahara covers approximately 10% of the land mass of Africa measuring 3.5 million square miles.

The other main deserts in Africa are the Kalahari Desert which covers parts of South Africa and Namibia as well as most of Botswana; the Karoo Desert of South Africa; the Namib Desert which runs 1,200 miles along the Atlantic coasts of Angola, Namibia, and South Africa; the Nubian Desert in north-east Sudan located between the Nile and the Red Sea and the Owami Desert desert in Nigeria which is again part of the Sahara desert.With the Sahara encroaching southwards into the Sahel (the zone between the Sahara and its southern savannahs), Burkina Faso, Chad, Djibouti, Eritrea, Ethiopia, Mali, Mauritania, Niger, Nigeria, Senegal and Sudan are planning to build a Great Green Wall  some 9 miles wide and 4400 miles long from Dakar to Djibouti of woodlands and greenery to stop the creeping sands and prevent soil erosion. 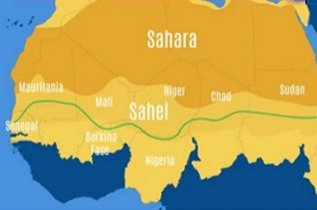 The project is being coordinated by the Sahel-Saharan States (CEN-SAD) and African Union and it is hoped to create a continuous barrier whilst avoiding inhabited areas and natural obstacles such as mountains and other rocky terrains. The ambitious project is due to commence shortly and is explored in further detail in this video documentary below. Our profiles of all the main deserts in Africa include facts and figures about each desert together with video clips. These deserts have a fascinating history and are home to large fossil remains and ancient structures.