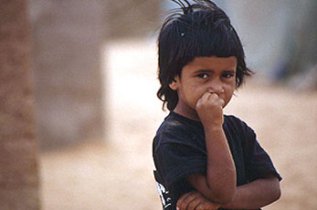 The Western Sahara, with its population of around 617,598 is located in north-east Africa, with Morocco to its north, a small strip forming a border with Algeria to its north-east, Mauritania to its south and east and the Atlantic Ocean to its west. It's a disputed territory between the Polisario Front, which mainly operates out of Algeria, and Morocco without formal country status however effectively occupied by Morocco after it annexed the northern two thirds of the territory in 1976 and then claimed the rest of the Western Sahara as its own in 1979.

Morocco cite that the Western Saharan is a natural part of its kingdom whilst the Polisario Front demand independence for the territory. UN brokered talks have continued to stall not least because there is no consensus on who should be able to vote in any proposed referendum. There are an estimated 165,000 Sahrawi refugees out of the Western Sahara's population living in these camps at Tindouf, Algeria, (a further 26,000 refugees live in Mauritania) located in the Sahara Desert where temperatures often soar above 50 degrees and there is little or no vegetarian. Food, water and supplies are furnished by international aid agencies.

The United Nations reports that 10% of the children there under the age of five suffer malnutrition whilst for a third of those children the malnourishment is acute. Matters are compounded by the camps having limited access to safe water. Natural events have added to the misery with flash rains and floods engulfing the camps. Given the nature of the territory there are no current direct opportunities to sponsor a child in the Western Sahara, however many children in need of a sponsor are refugees living in camps in neighbouring Algeria.