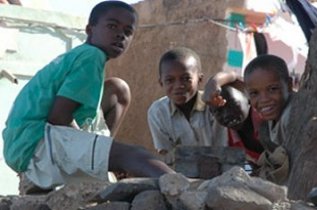 When the Portuguese 'discovered' the islands that make up Cape Verde they were uninhabited. Situated half way between Portugal and South America, the ten islands and five islets made for an ideal trading station for all sorts of goods including the slave trade. However, when the slave trade ended, there was little use for Cape Verde as it was no longer required for transit, nor did it have any meaningful natural resources. Despite this, its strategic importance allowed it to remain as a supply destination for ships travelling to and from the Americas with its harbour port Mindelo on the island of Sao Vicente coming to prominence in the 19th century. However, without generating revenue, Portugal was unwilling to invest in its colony, but neither was it prepared to let it go leading to increasing resentment from the island settlers.

Well over a century later, as Portugal's government collapsed, the Cape Verde islands were granted independence from Portugal in 1975 and briefly toyed with the idea of becoming part of Guinea-Bissau however opted for full independence. As with many newly established Africa nations, a one party system was created however full multi-party elections were held in Cape Verde in 1990. Today, Cape Verde is considered a good example of African democracy with a population of some 549,935 (2019), mainly the escendants from the first Portuguese colonists. Having no trans-national border issues by definition, the biggest problem Cape Verde faces is droughts leading to many leaving the islands in favour of a steady supply of food, water and better living conditions. In fact more people from Cape Verde now live off the islands than actually live on them. The money they send 'home' helps sustain the country's economy. Cape Verde is also affected by plagues of locusts which sweep in from the African mainland at regular intervals badly damaging much needed crops in a country that is already dependent on foreign food aid to feeds its inhabitants. 80% of the population are employed in agriculture however that only accounts for around 12% of GDP. Crops include maize and beans with bananas, sugar cane, sweet potatoes and cassava also being grown. Despite this, 90% of food needs to be imported to the island with exported crops mainly being bananas and coffee. 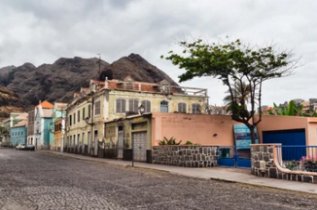 Cape Verde is in 126th place out of 189 countries and territories in 2019 when ranked in terms of life expectancy, literacy, access to knowledge and living standards, making it the highest ranked country in West Africa, with a life expectancy of 72.78 years (2018). Poverty, however remains rife and, for a country very much dependant on the tourist industry, the COVID-19 pandemic has hit the economy hard. 54% of the country's rural population (and 16% in urban areas) do not have access to flushing toilets (just 20% of the population has access to a sewer, and 27% of the population has to resort to open defecation) or other sanitation improvements and one in five is reliant on lakes, rivers and the sea to keep clean in the absence of available water. Despite many improvements in the water and sanitation sector over the last two decades in Cape Verde, the country still faces significant challenges in overcoming its water and sanitation crisis relying on the energy intensive process of desalinization for clean water. Primary school education in Cape Verde is mandatory between the ages of 6-14 and free for children ages 6-12 and while primary school enrolment is pretty much universal, only 27% of all children attend secondary school, especuially girls who are expected to focus on water collection and other domicilliary tasks. School attendance is also hit by the regular outbreaks of cholera with few doctors on the islands to assist when these outbreaks occur.

Check out all the latest African
volunteer work placements
and opportunities in Cape Verde.

Details of how to sponsor a
child in Cape Verde with Cape Verde
child sponsor programs.

Facts, video and information about
Praia the capital of Cape Verde located
on Santiago Island.

Read all the latest and breaking news from Cape Verde together with current events at our Cape Verde news portal.