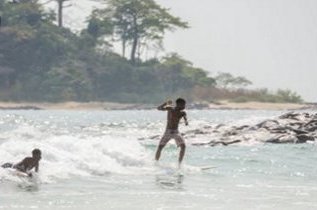 Sierra Leone gained its independence from The United Kingdom in 1961 and appeared to handle the transition well while other newly independent states broke down into tribal warfare. However by 1991 a civil war broke out that proved to be one of the cruellest and most destructive in human history, at least in the last century. Out of a population of just six million, by the end of hostilities 50,000 were left dead, many more wounded, disabled and/or orphaned and two million displaced. Although the war has been finished for over a decade its impact still deeply affects a scarred society in Sierra Leone leaving it in 182nd place out of 189 countries and territories in 2019 when ranked in terms of life expectancy, literacy, access to knowledge and the living standards of a country.

Worse than the poverty, worse than the destruction of most of the country's infrastructure, was and is the psychological damage to all the children who were killed or forced to take up arms as child soldiers and murder those within their own communities leaving a legacy of hopelessness and abandonment at the end of the war. These children had no where to go and no-one would welcome them. Volunteer work opportunities in Sierra Leone consequently focus on rebuilding works ~ schools, hospitals and orphanages ~ as well as health care and rolling out HIV awareness and prevention campaigns. There is also the opportunity to work with former child soldiers, sometimes just listening.

Please note many volunteer work opportunities in Sierra Leone have been put on hold because of travel restrictions related to the COVID-19 pandemic. Hopefully they will be back up and running soon. In the meantime, if you run or know of a volunteer work project in Sierra Leone let us know by contacting here. We look forward to hearing from you!