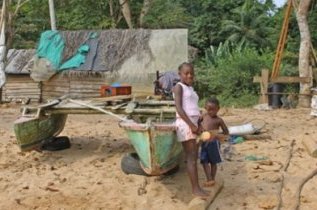 The island nation of Sao Tome and Principe (R.D.S.T.P.) is made up of the volcanic islands of Sao Tome (860 km2) and of Principe (104 km2) as well as some small, mainly unpopulated rocky offshore islands some 150 miles off the coast of Gabon. Overall the islands have a population of just 215,056 (2019), so, as you can imagine, there's not exactly a thriving range of volunteer programs going on out there despite Sao Tome and Principe being in 135th place out of 189 countries and territories in 2019 when ranked in terms of life expectancy, literacy, access to knowledge and the living standards of a country. The islands are very much dependent on income from its cocoa exports and, as such, are vulnerable to fluctuations in the markets being dependent on those revenues to buy in food as the islands are far from being self sufficient.

Around one-third of the inhabitants live on less than US$ 1.9 per day, and more than two-thirds are poor, based a poverty line of US$ 3.2 per day not least because most are plantation workers without their own land so cannot be subsistence farmers rather relying on others to sell the produce at a cost that will make up their wages. There are charity projects in Sao Tome and Principe however they tend to be administered externally with funds sent to the islands.

At the present time we are not aware of any volunteer placements on the islands of Sao Tome and Principe themselves however, if you run or know of a volunteer work project there,let us know by contacting here. We look forward to hearing from you!