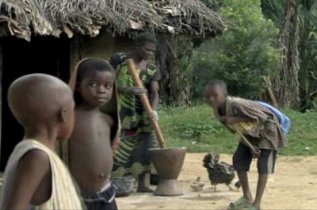 The Democratic Republic of Congo, often referred to as Congo Kinshasa after its capital, has effectively been a war zone since its independence from Belgium in 1960 and in the decades that preceded its independence, this vast and resource rich nation was pillaged by the King of Belgium for his own personal gain. Today Congo Kinshasa is ranked in 175th out of 189 territories and countries in 2019 by the HDI (Human Development Index) measured by the UNESCO Institute for Statistics (UIS) and the World Bank which is based upon the life expectancy, literacy, access to knowledge and living standards of a country. This makes it one of the worst countries in the world to live.

Millions have died in its wars, often fuelled by neighbouring states, leaving 15% of all children in the country as orphans. That's five million children, the population of an entire nation such as Scotland. Many areas of Congo Kinshasa are dangerous to work in and only organisations such as the Red Cross have volunteer work opportunities in such regions, however elsewhere there are a number of volunteer work projects working in education, supporting orphaned and abandoned children and improving access and knowledge about health care.

Please note that many volunteer opportunities in The Democratic Republic of Congo have been put on hold because of travel restrictions related to the COVID-19 pandemic. Hopefully they will be back up and running soon. In the meantime, if you run or know of a volunteer work project in Congo Kinshasa let us know by contacting here. We look forward to hearing from you!