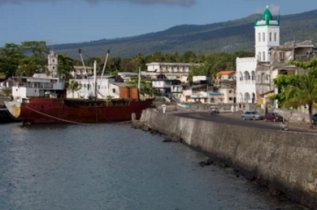 Moroni was ruled from the 12th to 19th century by Muslim sultans after Arab traders had established it as a small port in the 10th century in a small cove in south-west Grande Comore (Njazidja) island of the Comoros islands. It derives its name from the Arabic for "in the heart of the fire" due to its proximity to Mount Karthala (below), an active volcano that has erupted some twenty times in the last hundred years alone (it last erupted in 2006 ~ but just for a few days although the previous eruption in 2005 caused the evacuation of 30,000 residents due to the risk of lava flows and deadly volcanic gas.). It succeeded Dzaoudzi, the principal city of the island of Mayotte, as the administrative capital of Comoros in 1958.

Today Moroni with its population of some 75,000 (2021), despite many modern office blocks, hotels and restaurants, retains an Arabic feel with wooden boats scattered along the seafront, narrow winding streets, close built whitewashed housing and shops, numerous mosques and a pilgrimage centre, Chiounda. Perhaps the most famous of its mosques is the Ancienne Mosque du Vendredi built at the beginning of the 15th century and, whilst still a place of worship, is also a popular tourist attraction. Although there are high levels of unemployment in Moroni, many are engaged in the manufacture of soft drinks, essential oils such as Ylang Ylang, metal, wood products and cement. Others rely on the limited tourist industry for employment or in the production and export through the port of vanilla, cloves, cocoa and coffee. 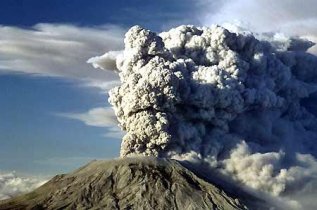 Roads link Moroni with the coastal towns of Hahaia to the north and Mitsoudje to the south, and Prince Said Ibrahim International Airport is nearby with flights to Dar es Salaam in Tanzania, Antananarivo in Madagascar, Addis Ababa in Ethiopia, Nairobi in Kenya, and seasonally to Turkey's Instanbul. Although there aren't a great many tourist attractions in Moroni per se, obviously a trek up the volcano would rank high on any activity list and, although somewhat rundown, the National Museum of the Comoros (in French: Le musee national des Comores) in the town is worth a visit with its four exhibition rooms featuring history, art, archeology and religion; volcanology and earth science; oceanography and natural science and finally; social and cultural anthropology.

Check out all the latest African
volunteer work placements
and opportunities in Chad.

We'll be featuring more about the Comoros Island chain as information becomes available.

Read all the latest news and breaking news from Comoros online at our African news site.

For information, videos and
photos of Comoros, check out
our Comoros profile page.