Life in the Central African Republic 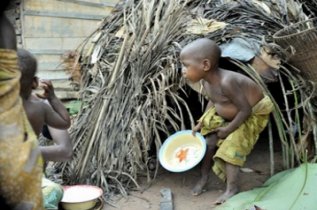 For many of the Central African Republic's population of 4.83 million (2020), life is not what you would expect in the 21st Century with ongoing political instability dating back to the time of independence and violence in the north of the country in particular forcing tens of thousands to flee from their homes and villages to eke out a life living rough in the forests, fields and bush. Driven from their subsistence farming and a long way from any modern health resources (the capital Bangui only has four hospitals and/or clinics and there are only 250 doctors for the entire Central African Republic population), life is about daily survival, knowing that at any moment rebel groups and/or the Lord's Resistance Army could attack, and kill, maim or rape.

Life expectancy is around 53.28 years (2019) with one in ten children dead before their fifth birthday (2019). The CAR also has one of the world's poorest school enrolments and 37.4 % of the population are illiterate (2018). Despite being rich in resources such as diamonds, uranium, timber, gold and oil, 67% of the population live on less than 60p a day and whilst GDP in Sub-Saharan Africa has risen by 78% since 1985, its barely risen by 10% in the Central African Republic leaving it as one of the six least developed countries in the world, and the only one not to have made any progress in the last twenty years. Sanitation remains a serious problem with safe water only being available to 40% of the population and less than 30% have access to proper sanitation as of 2018 with the ongoing conflict being a major contributory factor in this lack of progress. 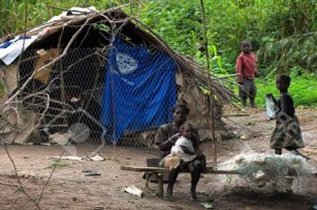 It is estimated that the number of displaced persons in the Central African Republic is currently 669,791 (2021) and these adults and children are at particular risk of trafficking in a country already well known as a source, transit, and destination for human trafficking particularly children who are sold for sexual exploitation, domestic servitude, street vending, and forced agricultural, mine, market and restaurant labour. Other children from the Central African Republic are sold abroad to Cameroon, Nigeria, and the Democratic Republic of Congo.

Roles are very traditional in the Central African Republic with women being responsible for the household and gathering of food whilst males fish and hunt and subsistence farm where they haven't been driven from their land. Meals are prepared around staple foods such as okra, cassava, rice, pumpkins, and plantains and, when available served with fish or meat. In a society comprised of 35% indigenous beliefs, 25% Protestant, 25% Roman Catholic and 15% Muslim, church plays an important role outside formal services as they organise many activities and support groups for all age groups including, of course, football.

Important dates include March 29th, the death of former president Boganda, May 1st Labour day and of course Republic day on 13th August to celebrate independence from France. The Central African Republic is in 188th place out of 189 countries and territories in 2019 in terms of life expectancy, literacy, access to knowledge and the living standards of a country leaving it far short of even sub-Saharan standards. The video documentary (below) explores life for many of those living in the north of the Central African Republic and the challenges they face to survive.