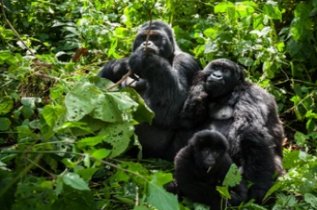 This live streaming gorilla webcam is located in eastern Democratic Republic of Congo and is unique in offering rare footage of the critically endangered eastern gorilla with only 3,800 known to be left alive. See if you can spot one of our cousins with this gorilla webcam. They are distinguishable from other gorillas by their stocky body, large hands and short muzzle and, despite their size, the eastern lowland gorillas subsist mainly on fruit and other plants. The males you will be able to see in this gorilla webcam normally weigh between 331-461lb (150-209 kg) while the female gorillas weigh around 168lb (76kg) with males standing at 5ft 7" - 6ft 5" and females around 5ft 2". They live in larger social groups than their western counterparts, often numbering around 35 individuals, and only give birth every 3-4 years, not least because new born gorillas are not fully weaned for the 42 months of their lives.

As noted, the gorillas you will be able to observe in their natural habitat watching this webcam are endangered mainly because of poaching as they are eaten as bushment by those living in the area, particularly those displaced by the ongoing instability in the Democratic Republic of Congo. Such is their vulnerability to human incursion, even the Kahuzi-Biega National Park, where the largest groups of eastern lowland gorillas live, found itself invaded by poachers, logggers and miners who seek coltan which is an alloy used in cell phones and unfortunately widely available throughout the region habitated by the eastern lowland gorillas. This gorilla webcam is provided by the Gorilla Rehabilitation and Conservation Education Center (GRACE) near the Tayna Nature Reserve who work to provide a safe environment in general but who also care for rescued Grauer gorillas. As with our other webcams, as it is situated within a remote destination, the camera may not be functional from time to time and on those occasions a highlights feed will be shown.