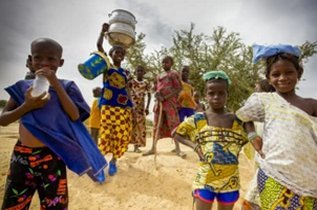 Mali is a landlocked country in the west of Africa where most of the land in desert, particularly in the north. More than half of Mali's total population of around 20 million people are under the age of 18 and most live in poverty, with Mali being one of the poorest countries in the world being ranked in 184th place out of 189 countries and territories in 2019 in terms of life expectancy, literacy, access to knowledge. According to UNICEF, the national child deprivation rate is 50%, slightly higher than the national (monetary) child poverty rate of 46% and few children will see their 60th birthday with a current life expectancy of 59.31 years (2019). Mali also has the world's sixth highest under-five child mortality rate, running at 115 deaths for every 1,000 births (2018). Children in Mali belong to various ethic groups, the main ones being the Bambara or Bamana, the Fulani, Dogon, and Tuareg. 94.84% of the country is Muslim and predominantly Sunni with Shi'i comprising less than 1% with many Malians returning to their family villages if they have moved away to celebrate important holidays such as Ramadan, Eid al-Fitr and Eid al-Adha where flowing, colorful robes called boubloveous are worn.

Children in Mali tend to live in the same households as their parents, grandparents (although eye contact between a child and an elder is considered disrespectful), aunts, uncles and cousins along with their own siblings with an average 5.78 births per woman (2019) reflecting a preference for larger families but also an acknowledgement of a lack of female education, poverty, and very low contraceptive use. Children in Mali can marry when they are 18 for girls and 21 for boys, although girls can marry under the age of 15 with parental or court consent, and there have been some instances of girls as young as nine getting married. Sadly, a number of these girls die due to engaging in sexual activity that their bodies aren't mature enough to cope with and female genital mutilation (FGM) is still widespread in Mali, especially in rural areas, and is normally undertaken before girls are six years old. 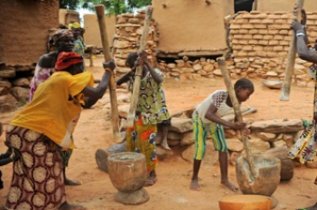 Within the family itself, to an outsider, the father is the main decision maker however it is the woman who quietly takes on this role, obviously more so in the 17% households headed by a woman in the absence or death of the male. In essence, women run the household whilst the men ensure there is food and they look after day-to-day finances whilst the woman again, makes any important decisions. When a Mali male has more than one wife, she is generally entitled to her own living space however is expected to jointly share domestic tasks such as food preparation and earning extra money for the household through crafts and selling specially prepared foodstuffs. Rural homes in Mali are traditionally built with a mixture of earth and (now) cement, with most families keeping dogs and/or cats for pets (and sometimes pigeons as well), whilst in urban areas while there are still mud huts, they are peppered with concrete houses and, for the better off, European style villas. Mosques and government buildings generally reflect a Sudanese style. 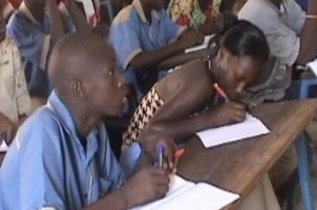 Education is compulsory and free for children in Mali for nine years between the ages of 7 and 16, however Mali's school enrollment rate is low, in large part because families are unable to cover the cost of uniforms, books, supplies, and other fees required to attend public school and working to help support the family is seen as a higher priority especially for girls where education is classed as an unnecessary distraction from household chores. In 2018, adult literacy rate for Mali was just 35.5 % and recent figures suggest that over 700,000 Malian children under the age of 15yrs are economically active. Those young people who do attend school (about 49.3% of girls and 64.1% of boys) often find themselves in classes of a hundred or more, not least because of the acute shortage of qualified teachers, and those classrooms rarely have tables or chairs particularly in the more rural areas. 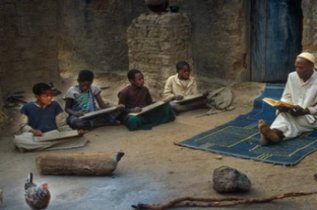 Other children in Mali are sent to Koranic schools (above) mainly by fathers who want them schooled in Islamic tradition but also because of poverty and an inability to provide for their children. Many of these children end up begging on the streets which is seen by the schools as an integral part of their religious instruction. Others are trafficked from Mali to the Ivory Coast where they work on cotton and cocoa plantations whilst girls are similarly trafficked there mainly for domestic servitude. It is estimated that over 15,000 Mali kids are sold into such labour every few years with the UNHCR reporting in 2020 that trafficking of children in Mali is increasing due to conflicts, COVID-19 and deteriorating economic conditions with many boys now ending up in mines and fighting for armed groups.

Children in Mali are slowly getting used to having a television even if it's one dragged out into their courtyard to be shared with neighbours, although visiting friends and relatives remains a more popular use of spare time, when not playing football however most Malian families do not consider it acceptable for girls and boys to socialize with the opposite sex. Most boys growing up in Mali will enter the agriculture sector being the backbone of Mali's economy whilst others will engage in cotton production, cattle and camel herding, and fishing. Others will be self-employed traders or artisans. Along the edge of the Sahara and into the desert in the north-west, the Berber Tuareg live alongside the Maures with their own nomadic lifestyle and caste hierarchies. 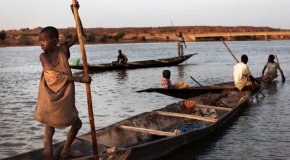 The video below provides insights into daily life for children in Mali, however those living in the north of the country should not be forgotten following the insurgency there with many living in fear as armed rebels stalk the streets determined to seek independence for the land they call Azawad.