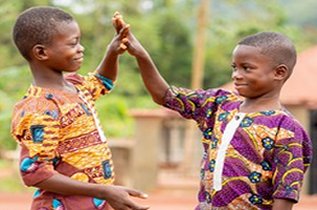 The Republic of Ghana is named from the word Ghana itself, meaning Warrior King, although at the time of independence from Britain in 1957 the area was known as the Gold Coast. The name Ghana was chosen as it reflected the ancient Ghana empire that thrived there in ancient times. Despite an economy buoyed today by gold and cocoa exportation together with a developing oil sector placing the country in 138th place out of 189 countries and territories in 2019 in terms of life expectancy, literacy, access to knowledge and living standards of a country, over 3.57 million people in Ghana still live in extreme poverty, the majority in rural areas where overall 13,252,922 reside.

Like many other African countries, children in Ghana, with a life expectancy of 64.07 years (2019), live within a matrilineal family or patrilineal family system. Under the former, children belong to the mother and her family whilst in the latter, inheritance of property, rights, names, or titles by persons are passed through the male kin. As such, a wider family can often look on with concern when a husband a wife grew too close as they fear such a close relationship may weaken allegienaces to their traditional family lineage (and property). Women in Ghana have an average of 3.82 children (2019) which has been falling for the past few decades although among the 'Ga', those indigenous to Ghana's capital Accra, a woman who gives birth to ten children is entitled to a traditional 'nyongmato' (a live sheep). There has been some debate in Ghana over recent years as to whether the number of children per family should be limited given the rapid rise in population from 8.735 million in 1970 to 31.7 million in 2020. 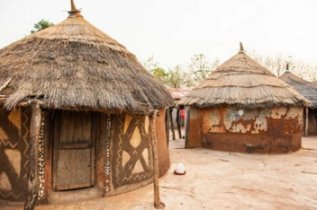 This debate is taking place because of the housing and infrastructure shortage in Ghana where, according to the country's Ministry of Water Resources, Works and Housing, there are high rates of over-crowded compound housing and homelessness, made worse by most homes being old and unrenovated with sometimes even twenty people sharing a room. Many of these homes have walls that are cracked, allowing disease infected insects to creep in during rainy nights and most lack basic amenities like toilets or bath houses with the youngest children using their backyard to defecate as they are too young to use the public pit latrine leading to regular epidemics of diarrhoea, malaria, and respiratory infections. For older children and adults, washing areas are usually wooden structures erected outside the house (to the armpit or shoulder level) and a piece of cloth used as screens during bathing. The houses themselves in rural areas are constructed using the wattle and daub wall (horizontal and vertical wooden frames daubed in mud) process, the Atakpame wall (a technique used by the Ewe ethnic group), or walls made from sundried bricks. There have been significant improvements for children in Ghana over the past period in terms of access to safe drinking-water which is currently more than 87%, exceeding the country's Millennium Development Goal (MDG) target of 78%.

Although generally in Ghana children are treasured within society with parents and the wider family doing all they can to ensure the child grows up happily, child trafficking still exists with many taken from their home villages to work in the fishing industry. In the 1960s the hydroelectrci Akosombo Dam was built creating one of the world's largest artificial lakes in the Volta River Basin, Lake Volta, however overfishing has led to a depeltion of stocks and cheap labour is required by the fishermen not only to keep their costs down but because the fingers of young children are best placed to release the fish from the ever decreasing size of the nets. Such practises are widespread in Ghana because many traditional families believe learning how to fish is more important for children than a wasted education. Others as they grow up will engage in the agriculture sector (increasingly harsh in the dry savannah north of the country where poor rainfalls are leading to frequent poor harvests) and, to a much lesser extent industry, including mining, lumbering, light manufacturing, aluminum smelting, food processing, cement, small commercial ship building and the growing petroleum sector. As in many other developing nations, there is also a burgeoning services sector however this has gone hand in hand with a large wealth disparity with the wealthiest 10% of Ghanaians now sharing 32% of the country's total consumption with the very poorest 10% of the population consuming only 2%. 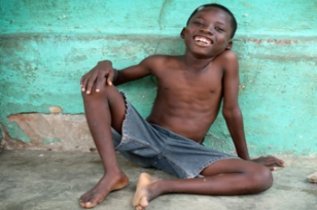 Children in Ghana speak around fifty indigenous languages with the most widespread being Akan although English is the official language spoken by at least half the population and school lessons are taught in English although local languages are widely used in elementary school. Education is currently divided into six years of elementary education then three years of junior secondary education which together are termed 'basic education' and are both compulsory and free. Following this are three years of non-compulsory senior secondary education which is also free since 2017 under the 'Free Senior High School' (Free SHS) education policy introduced by the country's President. Successful candidates can then attend four-year university programs. In reality, despite considerable investment in education for children in Ghana, there is still a low enrollment rate for girls in particular and an inadequate supply of trained and qualified teachers, which together with large class sizes in under resourced buildings with poor sanitation provision, results in poor academic outcomes and relatively high drop-out rates after compulsory education although still higher than neighbouring countries. The video (below) gives some insights into children's lives in Ghana followed by details of projects and programs working with children and young people you may wish to support.