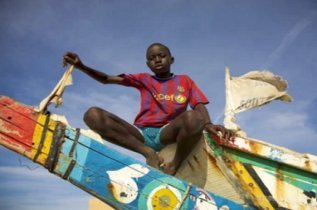 A stable country in west Africa, Senegal nevertheless faces many challenges from increasing desertification in the north, where water supply is poor with crops failing, to many of the country's young leaving to seek employment elsewhere particularly Europe, poor healthcare and educational provision and the sporadic violence and conflict in Casamance region in the south of the country where there is a strong separatist movement. Senegal also has a large number of street children, known locally as Talibes, who receive no formal education and are forced to spend much of their time begging for scraps of food. What education they do receive is simply learning Islamic texts by heart without developing other skills befitting the work sector. For other children in Senegal, although education is free and compulsory up to the age of sixteen, there are simply not enough school places and is is estimated that of children between the ages of five and fourteen just over 40% actually attend school with the figure dropping even further for older children. Fewer girls go to school in Senegal than boys, mainly due to poverty, and in secondary school the attendance rate in some areas for girls is just 15%.

Child sponsor programs in Senegal focus on working with orphaned and abandoned children, healthcare and prevention, nutrition, safe water access and education promotion. Many programs also work with Talibe children and others who are at risk of trafficking given Senegal is a source, destination and transit country for thousands of Africans, including women and children, trafficked for the purpose of labour and commercial exploitation. You can help when you sponsor a child in Senegal.