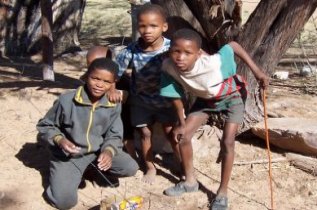 Botswana is one of the jewels of Africa with a long established democratic system, little corruption and a good human rights record. With a population of 2.352 million (2020), it is sparsely populated not least because 70% of its land mass is covered by the Kalahari Desert. It is the world's largest diamond producer and is considered a middle income nation. As such, unlike many other countries in Africa, there are few child sponsor programs in Botswana, however there remain real issues with children living in poverty ~ around 30% in rural areas ~ lack of food and one of the highest HIV/AIDS rates in the world. The average life span there is 69.59 years (2019).

Botswana has some 778,000 children under the age of 18yrs of whom 60-80,000 have been orphaned by AIDS, with over 15,000 children aged under 15 yrs infected themselves. It is estimated that 37% of the adult population is affected however today Botswana is widely recognised to have one of the most advanced programs in Africa to deal with the disease. This is one of the main issues facing a child in Botswana for many of them have to leave education when their parent(s) die and bring up their younger sibling group. Many then struggle to meet school related expenses and, deprived of access to education, limit their awareness of HIV prevention issues. For others its a better picture as Botswana invests heavily in education which is free for all, apart from those expenses, and young people generally attend school for twelve years in total with high literacy rates that are still rising.

Whilst those living in urban areas have easy access to most required services and have a decent standard of living, a child living in a rural community has less access to the minimum daily food requirements and often has little or no sanitation making them susceptible to waterborne diseases such as bacterial diarrhoea, hepatitis A, and typhoid fever. Child sponsor programs in Botswana focus on the child orphan population and helping those in poorer areas take advantage of the educational opportunities available to them by helping with school uniforms and required equipment. Charities also assist with HIV awareness campaigns in the country. You can help when you sponsor a child in Botswana.